After a number of preliminary rounds and several lists of words, three Castle Heights Elementary students came out on top in Tuesday’s spelling bee and advanced to the district-wide bee, which will be hosted in February.

Nicholas Bryner, Kristin Riding and Cole Callahan spelled their way to victory and will represent the school on Feb. 15 at Mont Harmon Middle School.

A total of 20 students, 10 from fourth and fifth grades, competed in the school’s competition. Before the bee, preliminary competitions were given at the grade level to determine those that would compete on the school-wide level with different words being used for each competition. 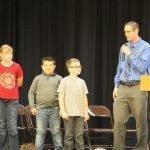