March 14, 15 and 18 (Thursday, Friday and Monday) will be a huge event in the history of Emery High School. On those nights at 7 p.m. in the EHS auditorium, the Emery High Theatre Department will present “XANADU,” which will mark the 200th production directed by Neal Peacock. The cost of admission is $5 for adults, $4 for students and senior citizens, and children under 5 years of age are free.

The play “XANADU” is based on the popular 1980 film of the same name starring Olivia Newton John. Though the play has been modified from the film, it still has the fun of that time when the 1970s turned into the 1980s – all the music, the fashion, the disco and the roller skating. The play involves 35 student actors and a large technical crew.

This will be Neal Peacock’s 200th production of his 36-year career at Emery High School. He began as the drama teacher and debate coach in the 1983-84 school year and his first high school play was “Up The Down Staircase.” He has produced and directed musicals, non-musical plays, one act plays, specialty plays and contest plays. Only plays where Emery paid royalties and charged admission were counted in the 200. That comes to an average of 5.5 plays per year.

The story of “XANADU” is of Clio, one of the nine muses from Olympus where the Greek gods live. She and her sister muses come to earth to inspire others to create art in its various forms. Clio has come to inspire a young man named Sonny who wants to create the greatest total artwork in the history of the world – a roller disco. He just needs inspiration and Clio is up for the task. There are three rules that Clio and all muses, must follow: (1) No one can know that she is a muse. To help with this, she changes her name to Kira, dresses in the 80s fashion and speaks in an Australian accent. (2) She can’t actually make art herself and must just inspire Sonny. (3) And finally, she must never fall in love with a mortal.

Thanks to a couple of her very jealous sister muses, Melpomone and Clliope, Kira (Clio) breaks all three rules and is sent back to Olympus to be judged of Zeus, who will have no choice but to condemn her to Hades, literally, forever. And yet all of this being set in the 1970s, the story really isn’t all that important. The costumes, the lights, the roller skates, the dancing and most of all the music is what this play is all about. Some of the important songs are: “Evil Woman,” “Don’t Walk Away,” “Strange Magic, Have You Never Been Mellow” and of course “Xanadu.”

There will be a party each night in the lunchroom following the play to celebrate Neal’s 200th play. The refreshments are hosted by Cold Stone Creamery and Desertview Federal Credit Union. Also, a display of programs, cast lists and pictures from all of Neal’s plays will be in the lobby of auditorium so people can find the play they were in during high school and remember their favorites.

Emery High drama department encourages all to attend this fun-filled and crazy romp of the 1970s. Tickets are $5 for adults, $4 for students and senior citizens and children 5 and under are free. You can buy your tickets at the door on the night of the performance. 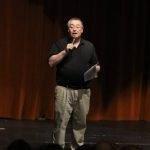 Neal Peacock prior to the production of “Broadway in the Desert” in 2018. ETV News stock photo by Dusty Butler.