The Carbon County Chamber of Commerce (CCCC) hosted its monthly luncheon on Sept. 15 at the Ascension St. Matthew’s Church in Price.

The guest speaker, and the community spotlight for the month, was Amanda McIntosh and the HOPE Squad of Carbon, Emery and Grand Counties. September is Suicide Awareness Month, and McIntosh has been busy visiting businesses, organizations, councils and more to spread awareness.

For the CCCC luncheon, McIntosh presented the Question, Persuade, Refer (QPR) training to those that were in attendance. Much like CPR, QPR works to teach three simple steps that may save a life. There are many ways that QPR may help an individual that is seriously contemplating suicide.

“What a great opportunity to spread suicide prevention and awareness training,” McIntosh later shared. “So many people [were] there today that I admire and hold in the highest of respect, it was a little nerve-wracking.”

McIntosh continued by saying that once she was able to get through sharing her story, it was business as usual in spreading hope everywhere “like it’s glitter.” McIntosh reflected that days such as the day experienced at the luncheon are hard to top for her in a professional sense.

“We are so incredibly blessed to live in a community that sees value in what I do,” said McIntosh. “Suicide is everyone’s business, so make it yours, too.” 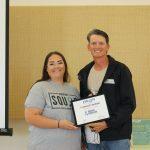 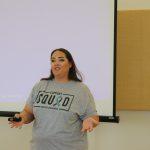