Representatives from Carbon County recently attended the Rural Day on the Hill and County Officials Day in Salt Lake City.

The Rural Day on the Hill and County Officials Day took place at the Capitol building in Salt Lake City on Friday morning. Senator Ralph Okerlund, among others, had opening remarks for the crowd. Okerlund took that time to inform the crowd that a Utah Rural Jobs Act bill is coming out that will enable the use of USDA money to work with small business investment companies.

Okerlund said that he believes the bill is a game changer and urged all to take a closer look to see how the program can be used to further jobs in rural Utah. Also discussed during the opening remarks is the fact that coal is a cornerstone for economic development across the state, particularly in the counties in which it is mined. There have been very low energy crises in the past due to coal production.

Many officials from Carbon County were in attendance at the conference. Governor Gary R. Herbert also took time from his busy schedule to speak during the conference. Herbert has been throughout Utah and previously worked as a Utah County commissioner for years. He welcomed everyone to the capitol. He then informed all once more that his goal for Utah is to have 25,000 new jobs off of the Wasatch Front. Herbert then stated that he believes that the Wasatch Front will be encouraged to look at rural Utah for jobs and employees.

There was then a special presentation titled “Health Equity Success in Price.” As previously reported by ETV 10 News, HealthEquity came to Carbon County, bringing many jobs with it and opening opportunities in Castle Country. The leader of the member services organization with HealthEquity praised the employees of Carbon County, stating that they were able to hire talent very quickly in the area.

The member services leader continued by saying that the service center is very specialized and the Price team is very willing to work and was passionate about joining the company. It was explained that at the end of each call with HealthEquity, the customers are asked whether or not they would hire the employee they spoke with for their own company, and Carbon County was one of the highest with 75% of the customers stating they would.

Another exciting presentation was the “Coal to Carbon Fiber Research” presentation. A professor of chemical engineering from the University of Utah spoke on this to the attendees. He stated that carbon fiber is an engineered material that has amazing properties. It can be stronger and lighter than steel and is currently being used in automobiles as well as other various products.

Funding was obtained from the Department of Commerce for $1.6 million over the next three years to begin looking at Utah coal in particular and how it is suitable for carbon fibers. The state of Utah has over 100 companies that work in engineered materials. The professor stated that he believes everyone tends to think of coal in a narrow way. However, it is like other natural resources that can be used in other ways as a raw material.

The coal will be taken and heated under oxygen deficient conditions that produce a material that is then able to be turned into carbon fiber. It is believed that this will greatly benefit rural Utah. 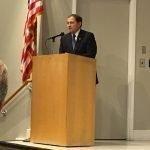