Bradon Bradford of the Southeast Utah Health Department joined with Castleview Hospital to bring the community an immunization awareness night.

This event, which took place on Wednesday evening, featured a fiesta meal with a taco or burrito bar. Bradford, who is the Director/Health Officer at the Southeast Utah Health Department, thanked Castleview for the partnership and began the evening by stating that immunizations are something he has been thinking a lot about lately.

Just last week, the annual county health rankings were released. Carbon County has been ranked last for years and this year is 26 out of 27. A lot of factors go into that, Bradford explained, stating that there isn’t one single solution to raise the ranking. One factor is the number of years of life lost, which can be from opioid overdose deaths and accidental deaths. Other things that come into play are diabetes, chronic illness and more.

In 2009, the H1N1 Flu was a big deal, Bradford explained. A number of school districts briefly closed their doors due to it and Bradford reflected on two individuals that had been traveling to affected areas and were starting to exhibit symptoms, with one of the contagious even traveling through Price to reach Moab. The H1N1 is not a vaccine preventable disease, however, and Bradford pointed it out to illustrate the way that illnesses can easily and quickly spread. Once schools were opened again, one of the first sports games after the reopneing was at Carbon High, which further demonstrates the connections.

In 2016, pertussis skyrocketed in Southeast Utah with an outbreak in three public schools. Over 30 cases were confirmed and of those, about ten of them had been immunized before. The pertussis immunization does not last forever and Bradford stated it is good to receive every five to 10 years.

Many graphs and charts were demonstrated during the discussion, touching on vaccinations and how the percentage of cases can drop or rise drastically with or without them. Bradford also spoke on herd immunity and its effectiveness, with Dr. Matthew Brady reflecting that many anti-vaxxers can likely thank herd immunity for their children not being affected by diseases. For most diseases, Bradford expressed that he considers herd immunity to be about 90 percent.

Herd immunity is effective in protecting the elderly, pregnant women, babies that are too young to yet receive vaccinations and those that are allergic to vaccines, among others.

Bradford also took a moment to visit the idea that many have forgotten the seriousness of these diseases. While there are some risks of vaccinations, there is a greater risk of not being vaccinated, according to Bradford. Measles went from being almost eliminated to three outbreaks in Utah in the last ten years (with an outbreak being considered three cases).

For every 1,000 children who get measles, one or two will die from it. Nearly everyone in the U.S. contracted measles before there was a vaccination and hundreds passed away from it each year.

“That number could be, really, zero every year with the proper vaccine,” Bradford said.

In Southeast Utah, the adequately immunized has risen in Carbon but lowered in Emery. In 2018, Carbon was at 96.1 while Emery was at 94.6. Bradford concluded the evening by stressing that disease does not usually announce itself before he opened the floor for questioning. 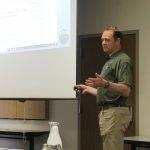 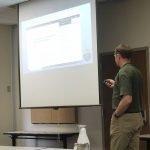 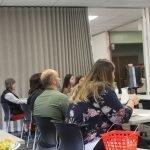 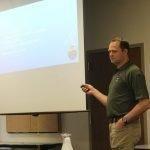 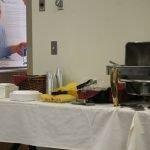 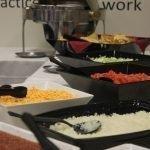 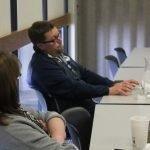