Anyone who has been in Carbon County for more than 10 years knows how the business district in Helper has changed from what it was. While efforts to revitalize it have been taking place for three decades, it’s been in the last decade that the difference has really shown.

One of the key players in that revitalization has been Gary DeVincent, although he downplays his role in changing things, saying the development has been a team effort.

“There have been many people that have helped bring life back to Main Street,” he said while sitting in his apartment that looks over the business district of downtown. “I am just a part of this, trying to help facilitate change here. The Jesperson’s and the Helper Project, David Dornan and many others have been instrumental in getting things going here.”

DeVincent came to Utah decades ago riding his motorcycle and finding that he liked it so much he set up a business restoring motorcycles in Utah County. His business flourished and, as it did, he explored the state. In that process, he found Helper.

DeVincent said from the first time he came to the town he realized what a gem it was. He knew then, too, that he had to be a part of it. He started to buy some properties in town and began making decisions about what to do with them.

His first obvious effort that drew great attention was the restoration of the old service station on the south end of town. A 1930s era structure, it had sat there a long time without anyone doing much with it. It was, and is, a part of Americana at its best. Today, when anyone gets online to look up images from Helper, inevitably, a photo of that station with its freshly painted and restored signs, equipment and the old tow truck sitting between the ancient gas pumps shows up. He also recreated another at the northern end of Main Street, not far from where the main exit from Highway 6 empties into the business district.

“I see those stations as what they have been called by others, bookends to the town,” said DeVincent. “When people see those, they think ‘There is something here worth looking at. Maybe I will look farther.’ My idea is that we get people walking up and down Main Street wanting to go in every building to see what is there because of the unique qualities the town possesses.”

Some of DeVincents’s friends wondered what he was doing. He spent a lot of money on restoring those stations, yet they were bringing nothing in. He said it was a labor of love, and a way to say to people “come here and see this place.”

“I wanted to propel the town and something even that subtle helps to do that,” he stated.

Since then, he has remodeled one building in town into a motorcycle museum and created a small area where a hot dog stand occupies the center of a courtyard. In fact, the hot dog stand itself was also at one time a small service station booth that he brought in for its design. This has changed the area across the street from the Helper Post Office and Main Street park dramatically, from a dilapidated old restaurant/bar decked out in a faded green into an attraction that gets people really thinking.

Presently, DeVincent is in the middle of remodeling two buildings in town. One is the old Newhouse Hotel, which he plans to turn into a nice hotel with a high-end restaurant and a boutique inside.

“I am actually looking for someone who would be interested in opening that restaurant and running it, but it will have to be someone who captures my vision for it,” he said.

The other project is what was most recently the Key Bank Building and was originally the location of Helper Drug. After Helper Drug went away, part of it became a dress shop called The Vogue, the sign of which has been uncovered by removing the stucco that was put over it many years ago. The other section had been the Helper State Bank. He already has businesses that are going to move in when the building is completed and restored.

“I want it to have the flavor of what it was,” he explained. “We have a mortgage company that will be moving in the part where the original bank was, so it will be a financial institution. I am going to try and take much of that back to the original. The other part is going to be a soda fountain shop combined with a high-end boutique. That will be in keeping with the soda fountain that was in the drug store so long ago. The fact is that when I do a building, I want to see a certain person or business in that place and I am ecstatic about how this has worked out.”

DeVincent said he intends to recreate the Helper Drug sign and put it over the front of the Vogue logo. “I want to use that Helper Drug logo sign, but I also have a hard time taking off a sign that was hand painted like the Vogue. By placing one sign over the other I will preserve the one underneath,” he stated.

He said he is also going to renovate the Kiva Club, which was once a speak easy, a relic of the 1930s. “It still has the little window in the door, a spiral staircase and not a window in site,” he pointed out. “I have a couple of people who are interested in turning that into a bar.”

DeVincent said that what he is trying to create is a town where up and down the sidewalks there are things for them to do and see all through the business district.

He did say that he has always been concerned about how people in the area feel about the fact that he came in and bought so many buildings in town. But, he pointed out that the only reason he did it is because he saw what so many people were doing to old buildings, such as doing things as inexpensively as possible and actually damaging the buildings’ history and their original design in the process.

“I saw people stucco everything. I saw them cover all the trim, the windows and other things. I am only trying to do what will preserve this Main Street. I want people to say when they come here ‘You just don’t see towns like this anymore,’” he concluded. 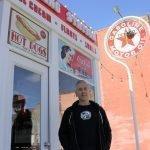 Gary DeVincent stands in front of The Filling Station, a food stand that is located next to the motorcycle museum he created out of the building that used to house The Point After in downtown Helper. 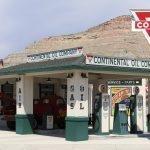 Now a well-known landmark in Helper, the restored Conoco service station that DeVincent created on the south end of the business district in Helper draws a lot of interest and is often featured in any pictorial or publicity that shows up about the town on the web. 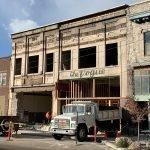 The former Key Bank building originally was Helper Drug. It later became Helper State Bank and a clothing store called The Vogue. DeVincent is working to turn the space into an office for a mortgage company and a soda fountain with a boutique included in it. 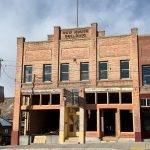