For the month of April, the Carbon County Employee of the Month was announced at Wednesday’s commission meeting as Christine Johnson of the EMT department.

Johnson has worked as an EMT for 10 years, beginning her work in January of 2011. Carbon County Human Resources Director Rose Barnes stated that, like all EMTs, Johnson does a great job within the county.

“I personally would like to thank her and thank all of the EMTs for what they do for the county,” Barnes stated.

Don Marrelli, Carbon County Ambulance Director, also spoke on Johnson, stating that her nomination was placed back in November. He then launched into a tale that took place in October of 2020, when many activities, events and businesses had temporarily shut down due to the COVID-19 pandemic and not much was happening for the Halloween holiday.

Marrelli stated that Johnson came up with the idea for all of the first responders within the county to gather together and host the drive-thru trick or treat event that took place on Halloween day at the ambulance garage, which is located in Price on Airport Road.

To host the event, Johnson invited 15 different first response groups and was successful in having 14 of the groups come out to participate. Johnson also decorated the outside of the ambulance garage to bring in the Halloween cheer. The event was such a success that Johnson sent family on candy runs more than once.

The event, which was supposed to take place from 2 p.m. to 4 p.m., saw a line from the garage clear into Walmart’s parking lot and did not end until 5:30 p.m. that evening.

“It was quite phenomenal,” stated Marrelli, who also remarked that there were about 1,500 vehicles that went through the line.

Johnson received a plaque commemorating the honor and will have her photograph featured in the hallway of the county’s administration building for the remainder of the month of April. 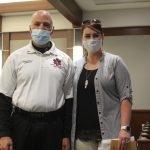 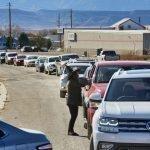 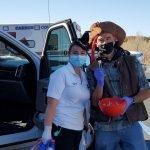