The Carbon High School swim team has been unstoppable for the past few years. With many accomplishments under their swim caps, both the Carbon County Commission and the Price City Council wished to commend them for their efforts.

First, the Carbon County Commission recognized the team at their March 17 meeting. Commissioner Tony Martines stated that this marked the third year in a row that the Carbon High girls’ swim team has taken the 3A state title, which he credited as an amazing accomplishment.

Head coach Allie Chamberlain took time to go over the accomplishments of the swimmers, stating that they are not only excelling but are breaking their own records. The commissioners then joked with the Lady Dinos, asking them if they were getting bored with winning all of the time.

The swimmers were then thanked for all they do and were told that it was amazing to win a state title and a three-peat. They were then given certificates from the commission.

Following this, on March 24, the Price City Council took their turn to congratulate the team for their impressive accomplishments. A number of swimmers were in attendance at the meeting, joined by the assistant coach.

The council remarked that they are proud and excited for them, also stating that they cannot wait to see what they do next year. Furthermore, Price City Mayor Mike Kourianos stated that, on behalf of the council, they wished to present the team with a plaque that commemorated the moment.

One plaque was presented to the boys’ team, while another was given to the girls. The honor did not stop there, however. The council also presented the swimmers with two banners that will hang at the Desert Wave Pool, marking it as the home for the state champions. 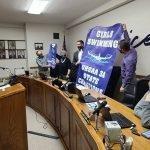 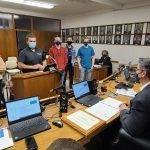 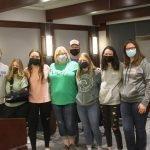 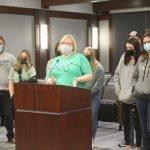 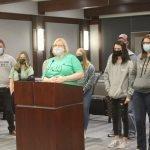