Congressman Curtis introduced himself and then Tom Hansen, who is running for House District #67. Curtis briefly told the attendees about his visit to the Hunter Plant and other stops in the county.

One of the first questions he addressed was, “Who makes the bests decisions?” He stressed his desire for local control but pointed out that all levels were represented at the meeting, including local, county, state and federal.

Curtis then spoke about visiting Brussels and Belgium, emphasizing how real the conflict in Ukraine became to him during his trip. He explained that he has introduced legislation to escalate financial pressure and sanctions on Russia.

The congressman was also questioned about the Conservative Climate Caucus that he chairs. He replied that just because he uses the “C” word, he is not part of the green team. He realizes the importance of fossil fuel for both the economy and national security. When asked if humans can really change the climate, he replied, “Man can change the climate. Science says earth is warming, but doesn’t say what is causing the warming cycle.”

Curtis then explained that he is working on immigration reformation in regard to the border policy as a cosponsor of that legislation. Here, he is calling for a state-sponsored visa program.

Next, he was questioned about the mental health epidemic, specifically in rural Utah with the lack of facilities to assist. He said this should be a state by state decision, but he has been working to improve telehealth, including mental health services.

The congressman closed by saying that he loves his job and loves serving rural Utah, which is why he visits so much. He then called for state delegates to vote at the state convention. Curtis chose not to obtain signatures but will depend on getting 40% of the votes at convention. 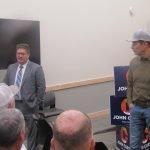 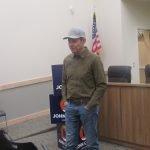