The Carbon School Board took the time during Wednesday’s meeting to recognize the Carbon High School (CHS) girls’ cross country team for being crowned 3A State Champions last month.

The girls competed in state at the Regional Athletic Complex in Salt Lake City in October and brought home a state championship, finishing the race with 63 points as a team. Grand High School followed in second place with 81 points. Runners on the team were Ada Bradford, Ambree Jones, Beverly Lancaster, Ellie Hanson, Lindsie Fausett, Rozlyn Stowe and Sophie Taylor.

“Each of you contributed exactly what you needed to at exactly the right time to pull it off,” said Superintendent Mika Salas. “We are just so proud of all of you.”

Not only did the Lady Dinos win state as a team, but Stowe was also named the 3A State Champion as an individual for completing her three-mile race in 18:17.1. She will move on to nationals along with three other runners to compete in the Foot Locker Cross Country Meet in Anaheim, California this December.

CHS’ boys cross country team was also recognized in front of the board for their accomplishments at state. The boys’ team tied for second against Canyon View; however, the tie breaker goes to the sixth runner of the team, placing the Dinos in third.

“Those boys had that trophy in their hands,” said cross county head coach Telisse Martak. “It was hard loss.”

Coach Martak was also congratulated for being named the 3A Coach of the Year. 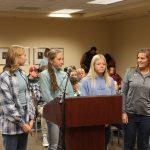 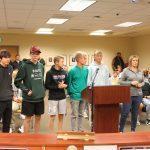