Things are starting to speed up in the second to last week of the session, and we are getting ready to come to a close. We are moving through bills quickly and having longer nights here at the Capitol. We have already passed through some pretty exciting bills, and I am curious to see what else we will accomplish during the last week.

In the Education Committee, we listened to HB 374 Sensitive Materials In Schools. This bill came about because of the concerns of parents who were disturbed by the materials that were in the school libraries. We were presented with examples of the pornographic materials that were found. The reason that I decided to vote for the bill was because the law would be changed to give school districts a process to evaluate reading materials and not have the books in libraries without threat of litigation.

Now, a school can pull a book and also be subject to lawsuits from organizations like the ACLU. I prefer a good process bill rather than a carte blanche banning bill.

I had three bills go through the vetting process that we have in the legislature. My drinking water bill passed, but it had a fiscal note and it was not funded. Maybe next year. HB 166, my water facilities bill, allows a farmer/rancher who is downstream from someone who damages their property with water, polluted or not, to not only sue, but if they prevail, collect reasonable attorney fees and court costs. We were all very happy when it passed Friday and was sent to the governor for signing. My Microenterprise Kitchen Bill, HB 292, will be passed and sent to the governor soon. I am not worried about it and know that it helps my original 2021 bill.

The Hope Scholarship Bill, HB 331, has caused a lot of controversy. The bill was sent to the Tax and Revenue Committee rather than the Education Committee. The reason is the sponsor knew it would probably not get passed there. The committee it was heard in is pretty stacked with ultraconservative legislators. The bill has been on our board, where we hear and debate on the House Floor, for several weeks.

The Hope Scholarship was written to allow parents to apply for funding to send their kids to private schools or pay themselves if they home schooled their children. It was also going to give them twice the amount that public education children are with in schools. The price tag for this bill is $36 million, and the money would be taken from the Public Education Fund, even though it is for private schools.

The sponsor has revised her bill three times and I received a copy Saturday night, with a request of my voting status by Monday morning. In the bill’s revisions, it now holds public education harmless and will not allow home school parents to pay themselves. It also requires students to be tested with norm-referenced tests every year.

Each session, our caucus looks forward to visits from our Washington D.C. Delegation. Last week, we welcomed Senator Mitt Romney and Senator Mike Lee to our caucus. It was interesting to hear their perspectives on Russia and the Ukraine. Senator Romney was right on when he said it was absolutely not a matter of if, but when Putin would invade. My heart goes out the Ukraine and their fight for freedom.

Thank you for letting me represent you! As always, feel free to contact me at christinewatkins@le.utah.gov or (435) 650-1969. 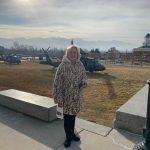 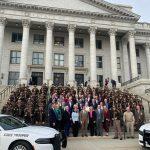 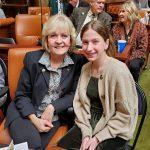