The Emery County Historical Society celebrated an evening of music and memories on Feb. 24 in the Swell Room of the county building in Castle Dale. This annual event spotlighted society members who shared their historical treasures. Despite the cold and snow, the meeting warmed the hearts of those in attendance.

The first order of business was elections for historical board officers, including Ed Geary as president and Cynthia Grant as vice-president/president elect. Frances Swasey will remain the treasurer and Suzanne Anderson the secretary.

In addition, Bernice Payne was honored as the outgoing president and thanked for her service and dedication. For her president’s project, she scanned Emery High School yearbooks from 1960 through 1990. These images will be donated to familysearch.org and ancestry.com.

Interspersed throughout the evening was the lively, toe-tapping music of County Roads. Band members include Carter Grant and his son Dallin as well as David Prettyman and Steve Lasslo.

Cynthia Grant shared her grandmother’s netted, tatted and crocheted doilies, baby bonnets and other articles, along with a collection of patterns from 1914 through the 1940s. Grant brought an early electric toaster and a pair of vintage lace up boots worn by Lucinda Jeffs, great-grandmother of JJ, her late husband.

Evelyn Huntsman of Ferron, with her usual wit and humor, showed her collection of kitchen items from her Grandmother Rasmussen. Among these were a well-used potato masher, butcher knife and spatula, hand-crank meat grinder, gear driven apple peeler and butter bowl, complete with paddle and mold. Huntsman also invited a guest to heft a piece of iron ore that came from the Iron Mission in Cedar City.

Next was a mug donated to the Emery County Archives by Joan Bowers, Suzanne Anderson’s mother-in-law. Anderson explained that Bowers’ father used it while in the Civil Conservation Corps. The CCC was implemented by Franklin D. Roosevelt during the Great Depression. Some of the work done by the Corps around Emery County includes trails, outlying roads, bridges, and developing springs and ponds for grazing on the desert. The CCC provided much needed financial relief as men earned $30 per month, most of which was sent home to families. Building men was also a priority by teaching etiquette, reading and health skills.

Frances Swasey showed her depression glass fluted dessert cup and a framed collection of silver spoons in honor of the Dionne quintuplets born in 1934. The “quints” were the first set where all survived; not one member of any other quintuplet set had previously lived more than a few days. Frances recalled the grandchildren vying to use the spoons and dessert cups when they visited Grandmother Swasey.

Mohrland then took center stage as Lori Ann Larsen showed a large framed photograph of the town taken in 1911. She also displayed an original Utah Railway Sketch Map from 1913. Larsen had two beer bottles recovered recently at the bottom of the hill at Mohrland and read a lively newspaper article of a raid on the town’s bootleggers.

Beth Black displayed a beautiful family bible from about 1911 complete with numerous paintings, illustrations and maps.

Dave Lowe brought some sort of a hand “wringer,” hoping someone might know its use. Suzanne Anderson took on the task of putting photos online in hopes of an archivist knowing what it was.

Bernice Payne displayed some of her father’s World War II memorabilia, including his uniform jacket and cap, a Japanese sword and flags with signatures. Payne told of her father being shot, and the photo of his sweetheart stolen by a Japanese soldier. The happy ending was revealed when Payne’s father later rummaged through a downed enemy’s pack and found the very photos taken from him. She also shared a beautiful tea set, which her great aunt gave her.

Donuts were served as guests lingered to enjoy more music by Country Roads. A special thanks to the band and those who participated.

The Emery County Historical Society invites members and guests to its next meeting on March 24 to hear Wade Allinson and “The Longest Posse Chase.” 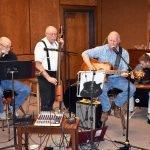 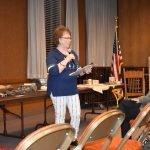 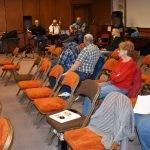 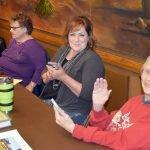 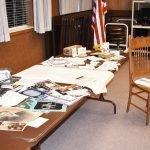 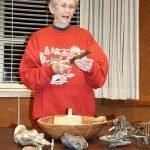 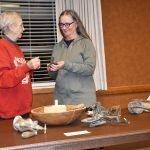 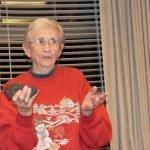 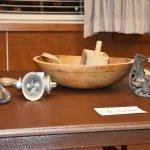 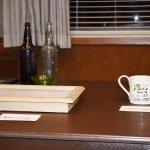 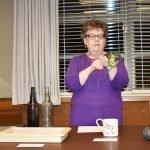 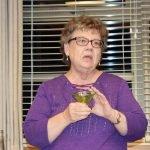 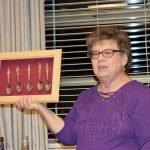 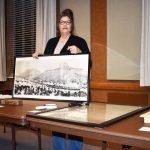 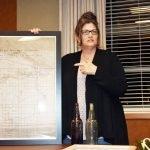 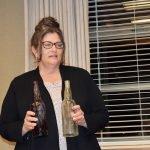 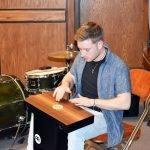 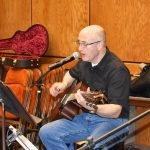 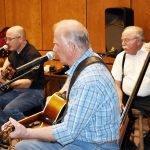 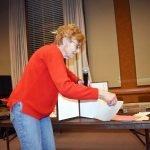 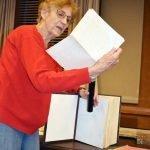 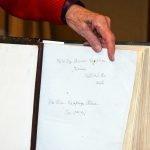 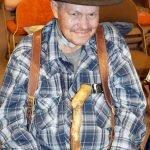 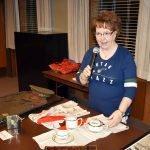 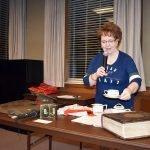 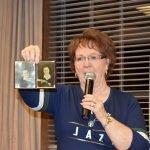 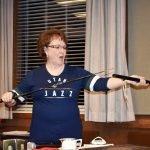