The Emery High swim team has continued their 2016-’17 season with plenty of first-place finishes and broken records to add to its belt.

While facing off against Carbon and Uintah at the beginning of the month, the Spartans managed to break one of three records broken thus far in their season. Daryl Guymon, Nate Gilbert, Deegan Minchey and Keldan Guymon managed a 3:35.79 finish in the 400-yard free relay, breaking the previously held 2A state record in the process.

The Saturday after their record-breaking tournament, the Spartans traveled to Grand where both the boys’ and girls’ teams brought home a first-place finish for the Black and Gold.

Victory came again for the swimmers as they traveled across county lines to take on hometown rival Carbon as well as North Sanpete and ALA. The Spartans grabbed numerous victories as the girls’ team finished second and the boys’ first, over 100 points ahead of second-place Carbon.

Most recently over the weekend, the Spartans continued their stellar work at the Tooele Invitational. Cold temperatures and snow couldn’t slow the team down, though, as two additional 2A state records were broken by the Black and Gold.

Garret Stilson, Keldan Guymon, Nate Gilbert and Daryl Guymon shattered the 200-yard medley relay over the weekend, clocking in at 1:48.30. The Spartans were far from over, however, as the four teammates continued on, breaking the 200-yard freestyle relay record with a time of 1:34.52.

As teams, the Tooele Invitational ended with the girls’ team bringing home a seventh-place finish, beating out eighth-place North Summit by five points while the boys’ team grabbed fifth.

Lady Spartans BriAnne Bass and Erin Oliverson managed third and fifth-place finishes, respectively, with the former finishing with a time of 2:26.79. Bass and Oliverson came back in the 200-yard free relay to grab fourth along with teammates Kaelee Hooley and Katie Carter.

Alexis Johansen grabbed a fourth-place finish in the 100-yard backstroke, coming in ahead of Carbon’s Megan Swasey. 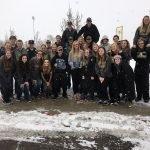 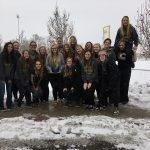 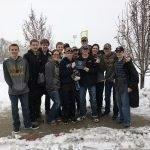 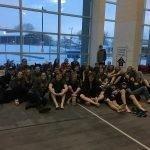 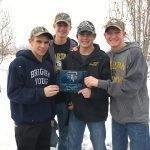