“We were pleased to host this conference with so many of our partners from the Uintah basin, to help companies understand the importance of diversifying and exporting,” said Derek B. Miller, World Trade Center Utah President and CEO. “With the resources that exist, barriers to entry have never been lower and the time has never been better to grow exports from rural Utah.”

WTC Utah presented the Vanguard in International Business Award to Shamrock Mining LLC for its international growth. Located in Hanna, Utah, Shamrock Mines produces a unique honeycomb-onyx stone that has been exported to Taiwan, China, Canada, Mexico and Italy. Similar to marble and travertine in strength, Honeycomb Onyx replaces traditional architectural stones as a more versatile and beautiful stone for counter tops, wall tiles and other architectural applications in homes and commercial buildings. This year, Shamrock Mining LLC has grown the international share of its business to 35% of its total business.

The Champion for International Business Award was presented to Commissioner Ron Winterton for playing an important role in the development of the oil shale in the Uintah Basin. He worked closely with the Estonian delegation from Enefit to bring the company to the Basin. For the past 8 years, Ron Winterton has served as Duchesne County Commissioner.

The summit included a lunch forum with a keynote address by Enefit CEO, Ryan Clerico, remarks by WTC Utah President and CEO Derek B. Miller and an series of short presentations featuring local successful businesses.

Ryan Clerico spoke about the economic changes occurring in the Uintah Basin. He emphasized the significance of doing international business and spoke about the necessity of collaborating with the community. Specifically he touched on the importance of having a social license to operate, meaning that a company must consider the local community as an important stakeholder in the decisions they make. 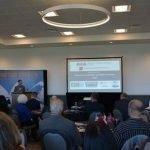 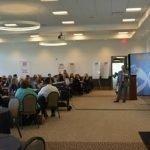 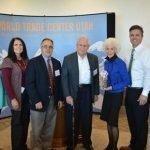