A public hearing was opened at the beginning of the regular session of the Emery School Board meeting on Wednesday evening. Two items were introduced to the public for input and discussion.

The first was the proposed judgement levy for PacifiCorp #15-1026 appeal, which resulted in a return of taxes to the entity and the need to make up the deficit of $146,823. Thus, the proposed tax levy judgement. Although there were some citizens at the meeting, there were no comments.

The other item was the ESSER ARP Plan proposal, which will give federal funding to improve air quality in school buildings by remodeling the ventilation systems. Kerry Lake, Emery School District Supervisor of Buildings and Grounds, explained that the economizers on the top of the older buildings are not working well and this funding would be used to improve them. Some funds would also be available for technology needs in the district. There were no public comments on this item so the hearing was closed.

During an earlier work meeting, Doug Mecham, Emery School District Special Programs Supervisor, reported classroom student/teacher ratios to the board. All of the numbers were lower than the state average.

Public health officials Lori Tuttle and Brady Bradford also spoke to the board, announcing that at the present time, there are no mask or vaccine mandates in relation to COVID-19. They reported that state directives remain the same. They did say that if teachers or district employees should get the virus, they would need to use their sick leave days as there is no longer funding for COVID leave.

The Emery High Future Farmers of America then met with the board to request permission for out-of-state travel to the National FFA Convention in Indianapolis in October. Several officers from the Emery High chapter explained their proposed itinerary, travel plans, conventions classes and experiences they hope to have. They also demonstrated one of their food science tests.

Four girls and four boys have been busy raising funds to attend this convention and they will be privately responsible for the expenses. They will be chaperoned by Mr. and Mrs. Thornley. The board granted approval for this travel. 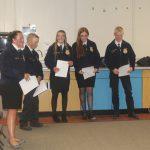 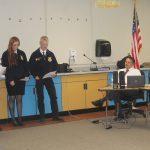 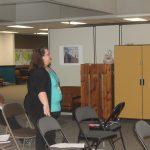