The Spartans made quick work of the Ogden Tigers on Saturday in the first round of the 3A Softball Tournament. Taija Olsen had herself a day, going 3-3 with a double, triple and homerun. In addition, she drove in six and scored twice.

Jalynn Fox also homered and finished 2-3 while Brooklynn Ekker and Aspen Taylor went 2-3 as well. Maddy Childs hit a double and pitched all three innings. She gave up just one hit and two walks while striking out five.

In the end, it was all Spartans as Emery scored three in the first, seven in the second and five in the third to win it 15-0.

The tournament will now move to the Spanish Fork Complex on Thursday where #5 Emery will play #4 South Summit. Catch all the action here. 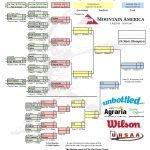