Cowboy Action Shooting is a multi-faceted shooting sport in which contestants compete with firearms typical of those used in the taming of the Old West. This includes single action revolvers, pistol caliber lever action rifles and old time shotguns. The shooting competition is staged in a unique, characterized, “Old West” style. It is a timed sport in which shooters compete for prestige on a course of different shooting stages.

Some of the fastest Cowboy-Action Shooters in the state attended Green River’s Outlaw Days. These fast draw outlaws shoot an entire stage in 20 seconds or less. A stage features an array of situations, many based on famous incidents or movie scenes, in which the shooters test their mettle against steel targets. A typical scenario would include a short “story,” which is a procedure as to target sequence and shooter positions. The average shooting stage involves two pistols (10 rounds), one rifle (10 rounds) and one shotgun (4-6 rounds).

Spectators came from Norway, Moab, Northern Utah and more to watch the Cowboy Action Shooting and shop at the small vendor fair. Following the shooting competitions, there was a prime rib dinner and Wildwood Duo concert. Outlaws and community members alike gathered for great food, music and prizes.

First-time participants left with big smiles and promises of returning next year. The event is held annually on the first weekend of November. Learn more at outlawdays.com 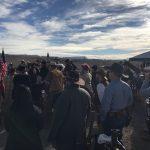 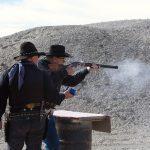 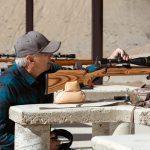 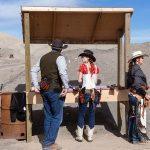 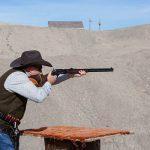