Gearing up for the new school year, Helper Middle School’s cheerleaders took part in a multi-day cheer camp that began on July 19. The Helper Rams cheer team is coached by Brittany Draper and Heele Eden.

On the first day, the team went through a technique boot camp with Mrs. April, honing their jumps. They were then taught a halftime and a sideline cheer from mother-daughter duo Shanel and Indy.

The Spirit Stick winner of the day was Reagan, who worked hard during jump technique. The MVP for the first day was Dakota.

“She is always smiling and never complains,” the coaches shared. “Dakota is so naturally talented and we are glad to have her.”

On day two, the team learned a hip-hop halftime routine. They also announced that the MVP of the day was Chloe, who has improved greatly and never gives up.

The Spirit Stick winner of the day was Olivia. The coaches credited Olivia as going out of her way to help others during stunting and dancing.

“Watch out world, Helper Cheer is on fire,” said Draper and Eden. 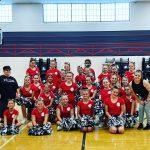 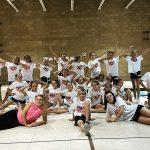 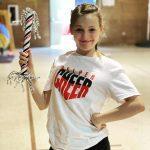 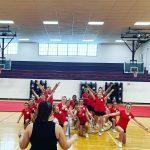