For decades, stories of a ghost known as the white lady located in Spring Canyon have circulated throughout the area. Myth, legend or rumor, the notorious apparition has held the curiosity of many generations.

Once occupied by Freemont Indians, the area now known as Spring Canyon was home to the area’s first coal mine. This mine was established in 1895 and the area quickly grew. In fact, at one time, approximately 2,000 residents lived in the small mining town.

Originally, Spring Canyon was called Storrs, which was derived from the mine bosses name, George Storrs. The town was known by this name until 1924, following accusations of mail fraud against the mine manager.

The demand for coal decreased dramatically in the 1950’s. By 1969, Spring Canyon was completely abandoned and became known as a ghost town. Mine accidents and deaths add to the ghostly illusion of the desolate area.

It is unclear when or how the white lady legend began. One thing is for sure, stories continue to be told about her eerie presence. Ghost hunters, thrill seekers, curious teens and those seeking a scare visit the area located west of Helper in hopes of encountering the spirit.

So who is the Spring Canyon white lady? A question that has countless answers. Some of these answers are explained, but interpretation is up to each individual.

It is said that the white lady ghost is that of a woman who lived in the area around 1917. Her husband was a miner who died in the mine. Her spirit is thought to haunt the area looking for the love of her life.

A second story claims that the spirit is that of a woman who’s husband and son were killed in the mine. Neither body was found and the white lady is searching for her loved ones.

Another speculation is that while alive, the white lady suffered the loss of her husband who was killed in a mining accident. She was then left behind to care for the couples young daughter. The daughter was later kidnapped and thrown into a wash and drowned. After both tragedies, the woman lost her mind and died. Her spirit remains on earth and she can be seen each night searching for her husband and daughter.

Stories also elude to a woman who’s husband passed away from blood poisoning. She was left destitute and killed her own baby. Local residents felt she had lost her mind and had her hospitalized. The young woman did not stay long in the mental facility. She allegedly escaped and returned to her home where she passed away. Her spirit remains in the area lost and confused.

Finally, claims of a young child killed by an avalanche and who’s mother killed herself add to the long list of white lady stories. It is said that the apparition is that of the mother looking for her child that was never recovered from the slide.

Countless photos and voice recordings have circulated throughout Carbon County for years claiming to be evidence of the white lady’s existence. One thing that is consistent, is that the spirit appears to be dressed in white, thus giving her the title of the white lady.

As her legend continues, creepy stories of her existence will continue to be told and even made up. One thing is for certain, the abandoned mining town of Spring Canyon is the perfect home for a ghost. 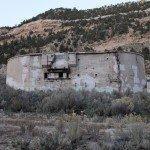 This large abandoned structure located in Spring Canyon is thought to be one home of the notorious white lady.