The Carbon County Historical Society went back in time during its February meeting, which was hosted at the Price Senior Center on Thursday evening.

The historical society welcomed Wade Allinson to be the guest speaker for the month. Allinson is a local historian, author and explorer, and he took the society members through a history of Eastern Utah Sheriff Jesse Tyler, the killing of Flat Nose George Curry and chasing outlaws through Southeastern Utah. Allinson began with Tyler’s early years, stating that the Tyler family joined the Mormon church in 1842.

They migrated to Bountiful in 1852 before moving to Fillmore that same year. In 1857, Tyler was born in Beaver. A short number of years later, in 1870, his mother and sisters fell off of the records and he was living with the cattle baron John King at Cove Fort. Four years later, he moved back to Iowa and left his son.

In 1898, Tyler ran against the incumbent sheriff, D.B. Wilson, in a heated election. Sheriff Wilson reportedly received 163 votes while Tyler received 162. Not ready to cede, Tyler contested the election results and the governor at the time intervened. Tyler then won the election by two votes.

Allinson explained that the San Rafael Swell, Robber’s Roost, Book Cliffs, Brown’s Parke and Powder Springs were areas that the outlaw element ran unchecked. Large cattle companies began moving into the area and were losing their livestock to rustlers and outlaws. In March of 1900, Sheriff Tyler was joined by Deputy Day and Marshall Joe Bush to make a second trip into the Roost where they chased Jack Moore and Blue John.

This chase spanned from Green River to the Dandy Crossing of the Colorado River, which is now under Lake Powell. The pursuit lasted an entire month and no outlaws were apprehended. In April of 1900, the manager of Webster City Cattle Company noticed that two men were changing brands on his cattle and he was forced away at gun point. A combined posse of Sheriff Tyler, Grand County and Sheriff Preece, and Utah County responded to the Green River to intervene.

Allinson then spoke on Kid Curry, or Harvey Logan, who was a well-traveled outlaw and was referred to as the Tiger of the Wild Bunch. His brother, Lonnie, and his best friend, Flat Nose, were both killed and he vowed revenge on the killers of his friend.

Tyler remained the sheriff of Grand County until 1900 when he was killed in the line of duty on May 26. Those that missed the presentation will have another chance to learn about Tyler in March. Allinson will repeat this presentation when he visits the Emery County Historical Society for its March meeting.

Also announced during the meeting was that new officers were voted in for the Carbon County Historical Society in January. Kathy Hamaker is the president, Tim and Linda Turner are the secretaries, and Lola Pierce is the treasurer. They are joined by Kay Rukavina, who is acting as a board member. Those that would like to serve on the board may contact Hamaker at (435) 650-6989. 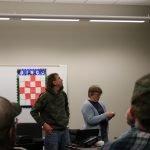 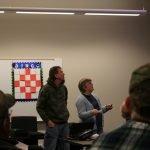 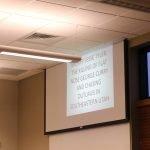 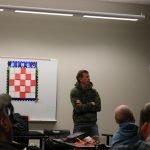 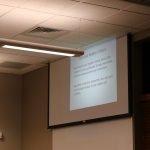 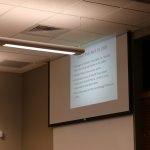