Doctors are calling this flu season one of the worst outbreaks of influenza in many years. Three Utah children have been taken by the flu this season.

While the Utah Department of Health tracks only flu deaths for children, three in one year, when compared to zero last flu season, highlights the severity of the illness.

Dr. T.W. Jones, infectious disease expert stationed out of Primary Children’s Hospital, has laid witness to the worst flu cases possible and has been quoted in stating that what he has witnessed coming into the clinics and emergency rooms this year are tremendous.

While the warmer weather is encouraging many into believing that the time to catch illnesses is behind us for now, doctors urge not to be so quick to turn down the flu shot just yet.

It has been stated that there will be a flux on highs and lows pertaining to the flu and related illnesses until at least May. While the flux vaccine has been reported to be less than 50 percent effective this season, it is still in everyone’s best interest to receive the vaccination, medical professionals state.

Further your knowledge on the flu vaccination and other immunizations during Castleview Hospital’s Immunization Awareness Night. This information-filled evening will take place on Wednesday, March 27, beginning at 6 p.m. in the hospital classroom and will feature a question and answer panel, presentation and free dinner for those in attendance. 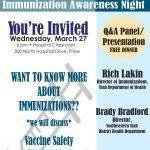