On Tuesday evening, Wellington City citizens were given the opportunity to meet the candidates for the upcoming election at an event hosted at the city’s elementary school.

Candidates in attendance were Paula Noyes, Caleb Nelson, Jack Clark and Barney Zauss. The majority of the seats were filled with locals that were eager to hear the candidate’s answers to pressing questions. These questions were chosen beforehand, with an option for a Q&A at the end of the event.

One question posed at the hopefuls was “What can be done to make Wellington more attractive?” Zauss answered first, stating that if there was a way to infuse pride for living there by painting a fence or pulling a weed or two, that should be a priority to citizens.

Noyes, who is serving as the current Mayor of Wellington City, stated that the ordinance is 12 inches high for weeds and suggested sending officers out to notify certain property owners. She also urged all to try and help out neighbors as some may be unable to physically handle yard work.

Clark agreed that a long of things can be done and stated that he has witnessed Noyes with a weed eater at the park, something continued from the previous mayor. He stated that keeping the city clean and presentable is a community effort.

Nelson then said that all of the answers before him have been about taking pride in their city and that talk can happen all day long about support, but somebody needs to step up to the plate and do it. He said that this pertains to the council, citizens and everyone else.

Two more questions came in the form of “While working with such a limited city budget, what would you like to see done with the funds?” as well as “When there are major problems that come up, should Wellington citizens know or just let the council decide?”

For the latter question, all candidates were in agreement that citizens should be able to be in attendance at meetings where decisions are made and are always welcome at the meetings to give input. “One of the reasons you elect us is to make decisions,” Zauss stated.

Noyes explained that the city council time and agenda is posted before a meeting actually takes place and nothing can be done or passed that is not on the agenda. The agenda is always on the Utah Public Notice website and is there for citizens to know exactly what is happening at each meeting. She agreed that, of course, people should be involved in their community.

Nelson stated that maybe having the agenda posted more in advance of the meeting than what is just legally required could help. He referenced Price City and how their agenda is posted on Facebook, saying that is a start in the right direction.

“Just being more advance, more prepared on our agenda items in the future will be a big help,” said Nelson. 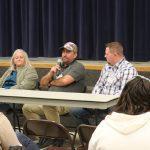 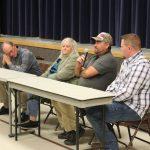 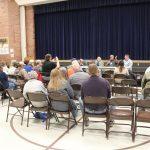