Dale A. Jones, 94, and Pete Palacios, 93, have a number of things in common. They are both residents of Carbon County in their 90s. They are both veterans of World War II and they both happen to exercise at the Castleview Hospital Wellness Center each week.

When asked what prompted him to begin exercising at the wellness center, Jones credited the stroke that his wife suffered in 2006. He praised the center, stating that the staff and experts helped her greatly and made it so that she was able to maneuver on her own once more. While she was visiting the center for exercise, Jones also worked out. He lost his wife seven years ago but continues visiting the center. Three days per week, Jones swims in the center’s pool to exercise each muscle without too much pain or exertion, he said.

In 1986, Palacios broke his right leg, prompting his retirement. Part of his recovery process was visiting the wellness center for therapy and he has been attending the center three days per week while seldom missing a day.

Palacios and Jones’ friendship began when they discovered that they were both marines in World War II. The closeness between fellow marines is said to be an automatic bond and the same is true for these fitness buddies. Jones expressed that his favorite part of visiting the center is the pool, while Palacios credited working on the machines and weights to strengthen his arms and legs as his chosen exercise.

When asked what his favorite part of being in the marines was, Palacios expressed the camaraderie between marines, taking care of one another and doing his part.

Jones truly enjoyed being able to learn how to shoot with a sling, advancing to the point that he could score expert shots. He also stated that he had a good time every place that he went in the marine crop, recalling strategies and trainings, which included even getting into position each time the mail plane visited. Pete’s son, David Palacios, remarked on how there were 16 million veterans at the end of the war and as of September 2018, 496,777 were still living.

“My dad and his friend are a great example of why they are referred to as the greatest generation that ever lived,” David stated.

The duo expressed their gratitude in finding a fellow World War II veteran that they are able to spend time with while staying in remarkable shape for their age, concluding with two words: “Semper Fidelis.” 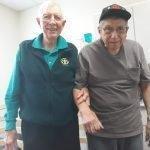 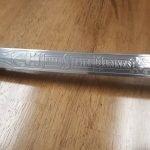