Ten year recipients were Cheryl Cox and Justin Truman. Next, 15 year awards were distributed to Gayleen Cox, Thad Morris, Eric Nielsen and AJ O’Neil. Tosha Barnett and Val Anderson were recognized for 20 years. Melanie Weaver and Shawn Bell have served for 25 years while Shon Roper was awarded for 30 years of service.

Brenda Tuttle, Emery County Clerk/Auditor, next presented the new precinct boundaries for 2022 and future years for approval. In a Dec. 14 redistricting meeting, it was decided to keep all districts the same, except boundaries for District 69 in Ferron. All residents outside of the north city limits in Ferron will now belong to District 67 with Clawson. This will match the State Precinct District changes.

Emery County Attorney Mike Olsen then advised signing the Janssen Settlement participation form and the subdivision distributor form, which will allow Emery County to join in the opioid litigation to address how opioids can be distributed. He stated this was a complicated formula but approval would allow Emery County to participate in the discussion. A motion to sign was made, seconded and approved.

Next, Emery County Sheriff Greg Funk began the elected officials’ reports by stating his gratitude and pride for the people who responded to the Greyhound bus crash on I-70. He reported that deputies, EMTs, fire crews, search and rescue team members, and citizens from Emery and surrounding counties responded in a big way in time of need. The other elected officials echoed his remarks and expressed their deep appreciation for everyone’s assistance in a difficult situation. 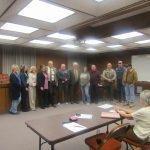 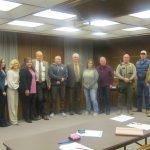